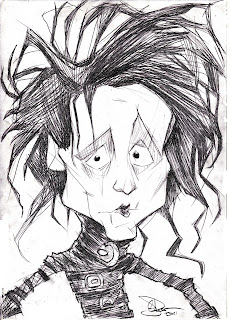 Edward Scissorhands, from the Tim Burton movie that came out in 1990, shortly after his uber successful Batman movie.

I was about 7 and being the only kid in my class with that particular name I received a new brand of vague schoolyard name calling.
Edward Scissorhands, was and remains one of the most original, eccentric and otherwise coolest characters to ever be conceived and was one of many pop culture icons that influenced the goth sub-genre of the early 90s. The design alone has inspired gothic and bondage fashion, an obsession with the macabre and comic series like Jhonen Vasquez's Johnny the Homicidal Maniac.
But at the time it came out I had no idea what the other kids were talking about so for once the teasing was lost on me.
I decided to draw the character for halloween.
Here's Stage one WIP
Posted by Ed at 11:20 PM