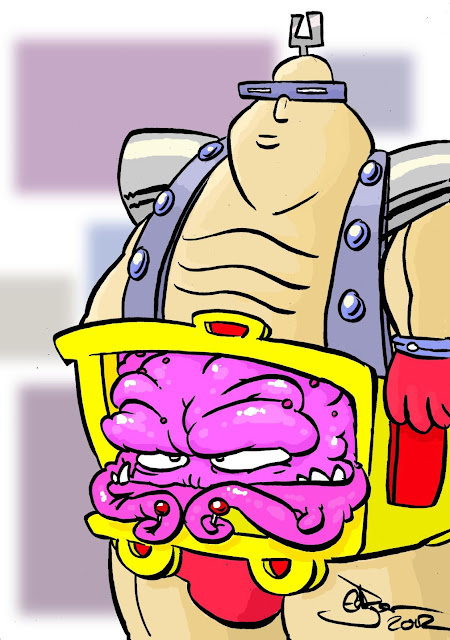 I grew up watching the 1987 Teenage Mutant Ninja Turtles animated series, like many cartoons for kids at the time it's most memorable and awesome parts seem to have been the title theme song and the accompanying animation. The animation produced for the show itself was choppy, however we watched it for the characters, the story lines and the fight scenes.
Though Krang was never my favourite there was something unique about him, aside from the fact he was a super intelligent alien from dimension X who orchestrated his evil plans from his massive Technodrome underground New York City. It was the fact he was helpless weak and soft bodied with two small tentacles as his only limbs which had the arcade machine control panel where he'd sit in the stomach of a massive android which happened for some reason to look like a sumo wrestler in a steel mankini with matching gloves and retro punk glasses and a tuning fork protruding from his head.
Krang always seemed to nag and his voice would become grating, but a better written villain hasn't come along in a while.
Posted by Ed at 5:27 PM