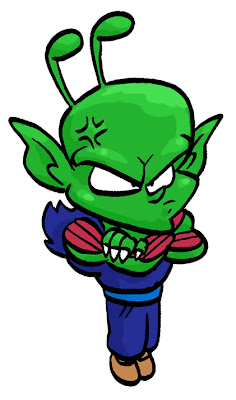 One of my favourite characters in the animated series, and by that I mean the edited, English dubbed version that appeared on Cartoon Network during the 90's and early 2000's. (Apologies to the anime purists out there who prefer reading subtitles, but I find that annoying and distracting).
Piccolo the Namek was a bad guy turned good guy and quickly relegated to support cast cameo who'd stand around as one of the main character's would power up and say with a shocked expression "IT'S IMPOSSIBLE!!!"Both building suspense and padding out a 22 minute episode nicely. Piccolo was kind of like a brooding green combination of Martian Manhunter and Batman to Goku's "Superman"
Posted by Ed at 6:56 PM