Pacific Rim. To say this movie has it all and is a fine example of a  watchable game, as opposed to a playable movie- which, let's face it, a huge array of video games are these days is an understatement. It's as if all those fan emails griping about how flawed movie adaptations of comic books, adventure games, saturday morning cartoons and other franchises was answered with a "Leave it with me, I'll make something you might actually like" reply.

The story is a basic one: Giant robots vs giant monsters.

The message is a blunt one: "Be careful to the environment"

The influences are as follows:

Combining all the kitch of the Mighty Morphin Power Rangers:

with a whole lot of homage to Starcraft 2 Wings of Liberty.

This movie is how giant robot verses giant monster movies should be done. The human characters aren't getting in the way or being shoehorned into a story that never really needed them they're integral.

The Kaiju in this pic has the same view of the Harbour bridge as I do from work. 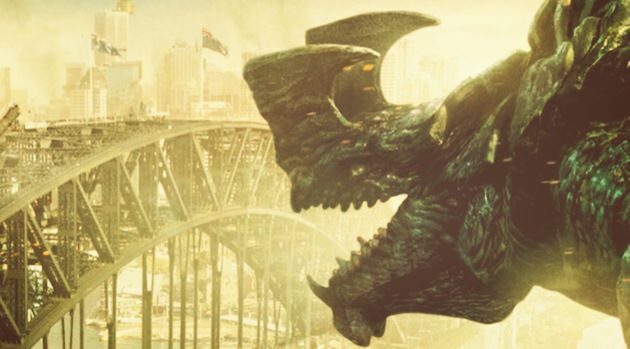