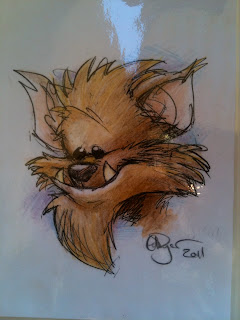 These are the faces of my first foray into Halloween characters, Tweeny, Steiny, B.N. Feratu and of course Blagoon.

I'd been meaning to do something in that vein for a while and developing these personalities from their humble beginnings, on the many, many pieces of A4 print paper I'm forever scribbling on. It was fun.

Tweeny here is a cross between my very 1980's homage to werewolf schlock movies and the overtly wholesome stuff that passes for that kind of thing these days.


His name is a simple play on words between Teen Wolf, http://www.imdb.com/title/tt0090142/ and "Tween" the asinine buzz word zeitgeisted onto a generation of kids who've known of no life before the internet.


His design essentially I wanted to portray a scruffy fun kind of personality, and to remember my late grandfather... I understand how weird that is but it's my cartoon! 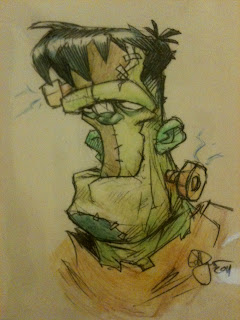 Steiny, came about due to my fascination with the whole Frankenstein's monster thing, that and who couldn't be fascinated by him especially since Michael Jackson's no longer around. But seriously.


The name is simple as the design itself Steiny, as in stein, as in look at that mug will ya! Looks like he lost a bet and has to use his face to tighten the bolts on the neck of the bigger monster.


The idea behind Steiny, the idea of the self made man... made man... that's man made or what happens when you take a corpse to get pimped put is a pretty cool one!


The original story by Mary Shelley, something she began writing at age 18 and finished at 21 is kind of fitting, one of the greatest horror stories of all time was conceived by some teenage goth chick! 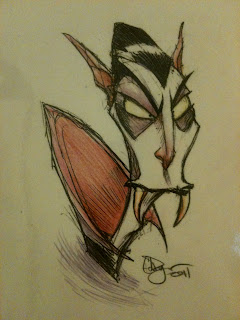 B.N Feratu, now let me be as abundantly clear as possible, vampires despite their weaknesses; the traditional being, wooden stakes through the heart, sunlight, garlic and the less conventional being boring bland high school girls with the personality of fly paper. Are, for want of a better word, resilient creatures.


I mean just picture it, according to the (at this point) mostly phoned in or tweeted folklore these monsters are not only shape shifting, cruel, calculated demonic predators stalking an otherwise oblivious herd from the shadows living immortally needing to fest on the blood and appearing to their prey as pure seduction.


They also like writing in their diaries, ponies and lots of awkward platonic hugs!


I wanted B.N Feratu to be what a vampire, to me at least, has only ever represented, A DORK! 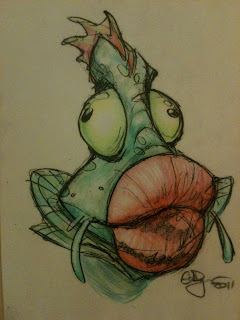 So finally, last but not least the Creature from the Black Lagoon, underrated, underrepresented and primarily water based- like with any team, someone has to be Aquaman.

These characters appeared for the Halloscream 3 day Halloween at Luna Park Sydney, as display pieces at my booth.