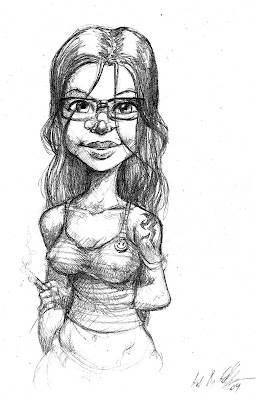 Meet Miss May, Amelia Gamble a tribute to all the girls I've loved before- well, up until 2009. As a Pop Culture Pin Up Princess it's really an "in name only" title as she is an original creation and a way of honouring my exes; weird though that may sound I really have no animosity towards any of them, which can either be attributed to either my ability to move on after a break up or theirs.
It's also a nice example of my early stuff, the anatomy is a little off, though the head is supposed to be that big and the original sketch has not been worked on since.

Through out the rest of May and June I will be bringing out more of my old stuff.
Posted by Ed at 10:19 PM