Sometimes there's a conflict between original source material and adaptation, simply put, whenever you meet someone who says "The book was better" this is what they're referring too.
To be honest I've never been a "read for fun" type, not due entirely to the quick fix mouse click world we all currently inhabit (I distinctly remember a pre-Internet time) but unless a book can be put on in the background, it almost always feels like a homework assignment. Even illustrated books left me wanting it would often be a case of not enough words to picture ratio or the other way around.


Anyone who says a picture is worth a thousand words needs to play Draw Some before waxing art theory.


However to strike a balance between word and picture is a razors edge, a co-existence that at times doesn't even work in comic books. 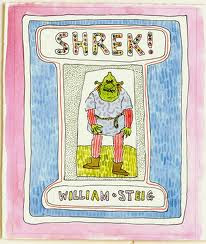 However after reading and by "read" I meant skimmed through at a second-hand book store I sometimes hang out in; I realised that sometimes the aesthetic decisions made in regards to character design can either be tragically missing the point or a marked improvement. In this case it's a stand off and yet those unfamiliar with the original would accuse the movie of plagiarism, however getting Shrek out of his paisley tunic and barbershop pajamas with ugg boots was probably the better move, in the long run. 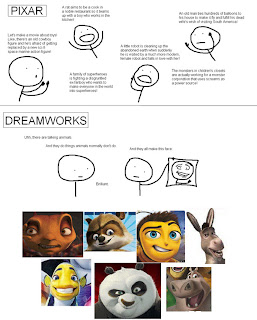 I still thoroughly enjoyed Shrek though by the second movie I lost interest in the series, which is, at the end of the day made for kids- usually with parents struggling to keep them entertained.
Posted by Ed at 9:17 PM