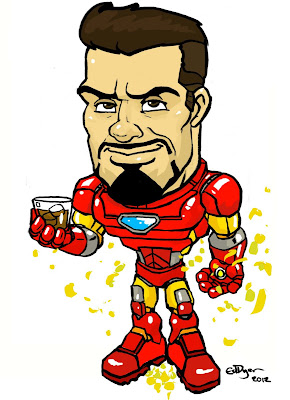 The casting of Robert Downey Jr as smooth, fast talking, sarcastic but kind hearted billionaire gadfly with a drinking problem Tony Stark in the Iron Man movies and the Avenger's movie was, to say the least flawless! There really is no other actor who matches the description of not just physicality but persona as Downey and he played the role in the super hero team like he owned it, on top of nearly every scene he was in which still maintained the harmony with his less veteran acting cohorts. Seriously how can you not love this guy.

Also the character of Iron man is more relatable to us, to be encased in a sweet flying robotic suit of armour that makes even the coolest sports car look redundant and as there is the fact this kind of power is actually attainable, with a decent lottery win of course ;)

This is the third caricature of Iron Man I've done, much like Spider Man he's a perennial and fun to draw and basically he's like the Marvel version of Batman billionaire playboy philanthropist who fights crime with all kinds of awesome high tech gadgets- he just looks like he has more fun doing it.