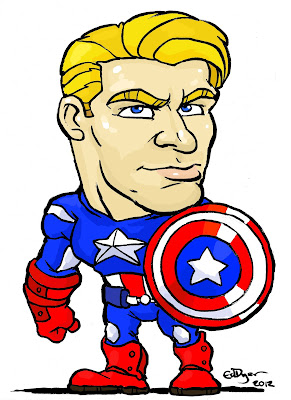 Chris Evans as Captain America in the Avengers movie was the consummate leader, diligent, hard working and due to his super solider serum imbued body able to survive being frozen since the 1940's; out of touch in many ways with the modern world. There's a great scene where he's playing the game Asteroids on the S.H.I.E.L.D ship's computer which is priceless. lol.

Evan's is no stranger to playing heroes, having been the Human Torch in the Fantastic 4 movies, which had their moments but suffered from poor handling. Captain America however does not meet a similar fate however seeing as the tie in movie and the Avengers are deftly crafted and well orchestrated.

As a kid I always thought the little wings on the side of his head were kind of WTF, but the character has definitely grown on me. Lots of fun to watch, comic book movies are fun again, as they should be.